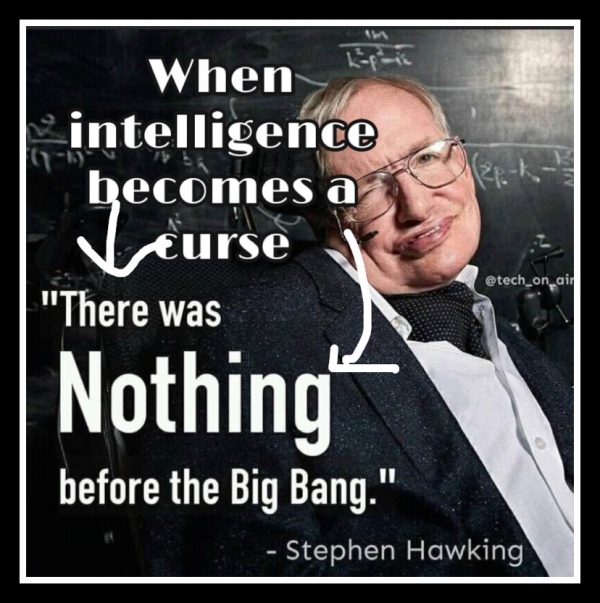 I recently noticed a picture (meme) circulating on social media that shows the late Stephen Hawking, theoretical physicist and well-known atheist, featuring one of his quotes, “There was nothing before the Big Bang.” Most people know that many scientists assert that the universe BEGAN with a BIG BANG.

For Mr. Hawking to say there was nothing before the Big Bang still leaves to question what was that NOTHING, and how could NOTHING CAUSE AN EXPLOSION?

This is why I define science as our attempt to give a physical, biological or chemical explanation to a spiritual world. It’s how God allows to spiritual to manifest itself so it can be perceived within the ‘physical’ world and the realm of ‘time’.

This is why I believe that to some, the intelligence that God gave man to dominate the earth has become a curse…WHEN INTELLIGENCE HAS BECOME A CURSE…

So, I respond to the statement that “Before the Big Bang there was nothing”, with, “Eternity and God need no beginning”.

“In the beginning…” was written as a point of reference for the benefit of those of us who exist within the continuum of time.

In the beginning God created the heavens and the earth. 2 The earth was without form, and void; and darkness [a]was on the face of the deep. And the Spirit of God was hovering over the face of the waters.

God is exists outside of ‘time’ and needs no ‘beginning’. Notice how the Complete Jewish Bible refers to God…WHY GOD DOES NOT NEED AN ORIGIN STORY…

2 Before the mountains were born,
before you had formed the earth and the world,
from eternity past to eternity future
you are God.

Notice how God described Himself to Moses as ‘I AM’…

I AM! ‘I’ is a personal pronoun and ‘AM’ is a being verb. God is THE eternal BEING and defined Himself as a BEING verb. Wow! That is no coincidence.

I’ve stated in other articles that our ‘spirits’ temporarily’ exist outside of ‘time’ when we’re in a deep sleep or under anesthesia. We can doze off or be put to sleep and not notice the time that elapsed while we were ‘out’. Also notice the fact that even though we were all alive and aware, our minds can’t remember the day we were born or when we reacted to stimuli when we were in the womb.

God has promised us eternal life and most of the time we think of an eternal future. However, God IS! He stands outside of time experiencing the past and the future as if it were happening right now.

22 It is He who sits above the circle of the earth,
And its inhabitants are like grasshoppers,
Who stretches out the heavens like a curtain,
And spreads them out like a tent to dwell in.

May the Lord God of Israel from Eternity Past to Eternity Future bless you and keep you in the name and authority of Yeshua the Messiah (Jesus Christ).

So, going back to the BIG BANG. When God created the universe and ‘said’ “Let there be…” I’m sure there was a physical manifestation of sound and an incredible release of energy in an explosion. To me, the BIG BAND only confirms God lives.

If you’re on social media you see them every day…

Videos of people who don’t know they are being watched that have been posted to amuse the masses.

Many times these videos go viral with thousands of views, shares and mean-spirited comments. People love to add their comments hoping get multiple 😂 responses.

The problem is that many times, there is a real person who is being humiliated in many of these videos. This could be a person who is already fighting for their self-esteem.

How would you like for your most embarrassing, humiliating moments to go viral.

Please don’t help give life to something that may be killing someone’s spirit.

12 Therefore, (A)whatever you want men to do to you, do also to them, for (B)this is the Law and the Prophets.