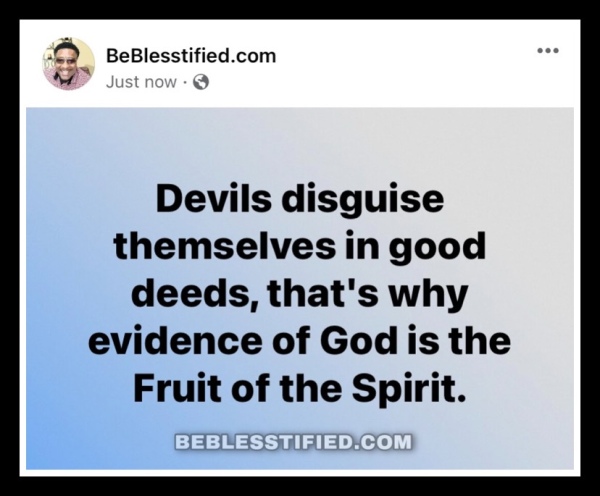 God has made it clear in His word that our Adversary the Devil, and those that the bible describes as his ‘ministers’ disguise themselves as ‘light’…

13 For such are false apostles, deceitful workers, transforming themselves into apostles of Christ. 14 And no wonder! For Satan himself transforms himself into an angel of light. 15 Therefore it is no great thing if his ministers also transform themselves into ministers of righteousness, whose end will be according to their works.

Notice that God tells us through the Apostle Paul that his followers are ‘deceitful’ workers. The devil can’t deceive the people of God by doing evil. The term ‘ministers’ isn’t limited to ‘preachers’, but those who are serving the devil’s agenda rather than God’s.

Some people’s sins are very overt and obvious. There’s no deceit in that…

However, too many Christians are being deceived by ‘ministers’… preachers, politicians and leaders who disguise themselves in ‘good works’. That’s why God teaches us that ‘good works’ can’t save or justify us…

9 not of works, lest anyone should boast. 10 For we are His workmanship, created in Christ Jesus for good works, which God prepared beforehand that we should walk in them.

Yeshua the Messiah (Jesus Christ) also taught us that the false messiahs, (false deliverers) would try and deceive the ‘very elect’…

24 For false christs and false prophets will rise and show great signs and wonders to deceive, if possible, even the elect.

This won’t be done by acts of overt sin and evil, but by pretending to care about the concerns of true disciples. It’s too often that believers are putting their hope or trust in a man or woman to ‘deliver’ rather than God. That’s elevating that man or woman to the level of messiah.

So, how can you tell the difference? God makes it clear.

“BY THEIR FRUITS YOU SHALL KNOW THEM.”

15 “Beware of false prophets, who come to you in sheep’s clothing, but inwardly they are ravenous wolves. 16 You will know them by their fruits. Do men gather grapes from thornbushes or figs from thistles? 17 Even so, every good tree bears good fruit, but a bad tree bears bad fruit. 18 A good tree cannot bear bad fruit, nor can a bad tree bear good fruit. 19 Every tree that does not bear good fruit is cut down and thrown into the fire. 20 Therefore by their fruits you will know them.

No matter what ‘good’ they may claim to support or even champion, if they do not display the Fruit of the Spirit —

If they don’t display the behavior, attitudes and character that God gives as EVIDENCE that He lives in them — If they refuse to repent or be accountable for the wrong they’ve done —

If they constantly cast blame and accuse, which is evidence of the Accuser of the saints —

If they take pride in never giving in, apologizing or being willing to yield —

Then they are not of God.

22 But the fruit of the Spirit is love, joy, peace, long suffering, kindness, goodness, faithfulness, 23 [a]gentleness, self-control. Against such there is no law.

17 But the wisdom that is from above is first pure, then peaceable, gentle, willing to yield, full of mercy and good fruits, without partiality and without hypocrisy.

Don’t be deceived. Yes, people can change, but a person who has never been know for their character, integrity and faith, and has not publicly repented of that reputation can never lead disciples of Christ…politically or spiritually. WHEN ‘CHRISTIANS’ CHEAT ON JESUS WITH ANOTHER ‘MESSIAH’…

It was King David’s heart of repentance that made him a man after God’s own heart.

You cannot determine if someone is a ‘Laborer for the Harvest’ by the ‘good they do’.

Profanity! Insults! Rumors! Gossip! Retaliation! So, many times we say, “I just had to say it!”

So many times we assert, “I couldn’t hold it in!”

You don’t have to say it!

You don’t have to curse them out!

You don’t have to let them know how you feel!

You don’t have to tell them what was said about them!

You don’t have to spread that rumor without any facts!

You don’t have to say everything on your mind!

You can hold it in!

Just as no one embarrasses themselves by blurting out a loud, smelly fart in public…just as we one restrain the hot air that comes out of his or her behind

We can also restrain what comes from our mouths.

No matter how bad one’s stomach may be ‘upset’, not matter how severe the case of diarrhea may be — no one will every embarrass themselves by just ‘letting it go’.

You do everything you can to ‘hold it in’.

27 (A)He who has knowledge spares his words,
And a man of understanding is of a calm spirit.